Researchers of the INTRIM consortium publish 4 papers in Cell 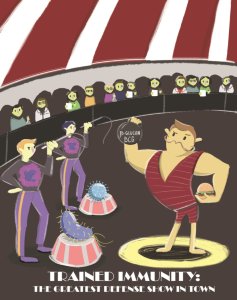 Longlasting adaptations of the innate immune system through the bone marrow

The immune system not only detects and destroys pathogens such as microbes but also plays a role in the onset of diseases such as arteriosclerosis. Scientists from Radboud university medical center, together with fellow scientists from Bonn, Dresden and Pennsylvania, studied a new mechanism that regulates the immune system’s functioning. For example, they discovered that cholesterol inhibitors may prevent infections, that a high-fat Western diet can have a long-lasting effect on our immunity and that even our stem cells can be disrupted. Today, four publications on the manipulation of our immune system appear in Cell and Cell Host & Microbe (three articles in Cell, one article in Cell Host & Microbe).

Our immune system consists of two parts: innate immunity and adaptive immunity. Both help in fighting diseases but there is one big difference. Our innate immune system works rapidly and non-specifically: it destroys all invading organisms. Our adaptive immune system is more accurate: these immune cells are able to distinguish between the body’s own cells and foreign cells. If they encounter an invader such as a microbe, they produce both a specific immune cell and a memory cell. This memory cell reacts rapidly on subsequent exposure to the same organism. Cells of our innate immune system, however, also have some capacity to ‘remember’ things. When they encounter an invader, they may be reprogrammed. If they are subsequently exposed to a random invader, the immune cells will show an enhanced response. This is called ‘trained immunity’. However, this training does not always turn out well. Overactive immune responses can sometimes even cause diseases.

Learn more in this video:

The cells of our immune system need nutrients in order to function, for example to produce inflammatory mediators that induce other immune cells to destroy invaders. An important source of energy is cholesterol. Researchers of Radboud university medical center have now demonstrated that mevalonate, a by-product that is generated in the immune cell upon the production of cholesterol, is responsible for the training of the immune cell. The researchers also found that immune cells of patients who produce high levels of mevalonate due to a genetic disorder are more often trained and produce more inflammatory mediators. That gave them the idea to study statins. Statins are well-known, cheap cholesterol inhibitors. “These statins may indeed inhibit the immunity training since mevalonate is no longer produced,” explains researcher Siroon Bekkering. “Because of this, the cells behave normally again. In the future, we may be able to use statins for various inflammatory diseases.”

How our diet can cause inflammatory diseases

Not only ‘invaders’ can reprogram the immune system. In a second study, the researchers, together with fellow scientists from Bonn, observed how a Western diet, full of cholesterol and fat, can put immune cells into a trained mode. Mice that were fed such a Western diet for four weeks and after that, were fed a healthy diet for four weeks, still had changed immune responses. So the memory response continues for some weeks. This is also due to the fact that the precursor cells of the immune cells are trained in the bone marrow. These stem cells, which are responsible for the production of immune cells, continue to produce trained immune cells long after the diet has stopped. So the immune system responds to the Western diet as if a pathogen enters the body. If the diet is followed for a period of time, a long-lasting inflammation occurs which may ultimately lead to, for example, cardiovascular diseases. Professor of Vascular Medicine Niels Riksen: “This means that ill effects of an unhealthy lifestyle are likely to have a prolonged impact, also if this lifestyle is temporarily improved after 1 January as a result of good intentions”.

In a third study, the researchers, together with fellow scientists from Dresden, Bonn and Pennsylvania, investigated how the stem cells produce other immune cells through ‘training’ and what these immune cells look like. In this process, mevalonate also plays a role. Professor of Experimental Internal Medicine Mihai Netea: “First we assumed that only the innate immune system itself can be trained but it has now turned out that also the stem cells can be trained.” This training of stem cells leads to strongly trained immune cells that can fight invaders even better. It enhances your immune system.

Reducing inflammation by inhibition of training